In October 2018, construction began on the new Belfast Keller I-95 interchange in Savannah, Georgia. The main objective of the new interchange was to ease traffic congestion on State Route 144 and decrease travel times with improved connectivity on I-95. Departure routes for residents during natural disasters is always crucial for Georgia’s coastal region, which was another primary concern for the Georgia Department of Transportation.

State Transportation Board Member, Ann Purcell, said “transportation is critical to the area’s tourism industry and also to promoting overall economic development throughout southeast Georgia. I-95 is the cornerstone to that growth.” 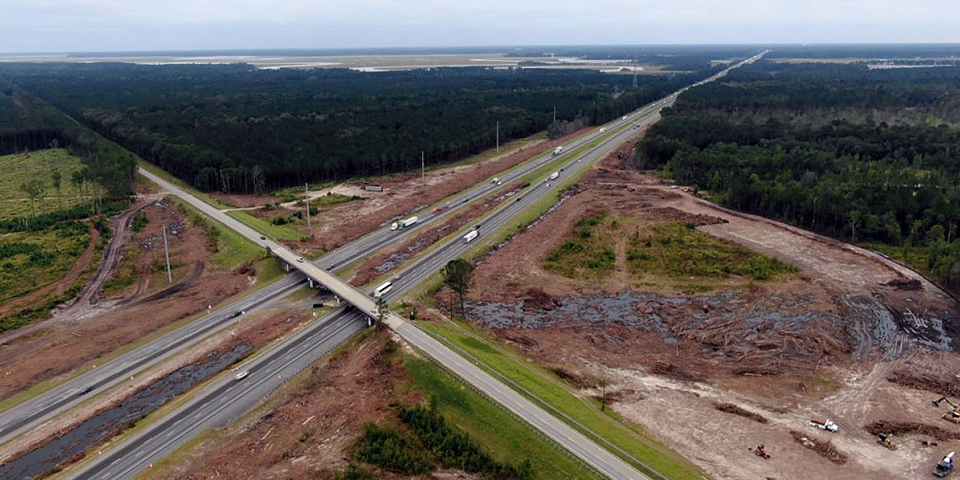 Atlas Surveying’s Savannah-Hilton Head Island office was subcontracted to perform surveying services for three phases of the Belfast Keller interchange project. In the first phase, Atlas was hired by Pittman Engineering Company to perform boundary, topographic, and as-built surveys for 4 tracts. Preliminary and final subdivision plats were prepared for eight different areas, as well as an ALTA survey. For the connector road, a topographic and record survey were performed and a preliminary and final plat delivered. A corridor survey and final right-of-way plat were also produced.

For phase two, Atlas was hired by Pulte Group to perform pad as-builts for eight lots, as well as topographic, tree, ALTA, and as-built surveys for two additional parcels.

In phase three, Atlas was hired by Raydient Places and Properties to complete an easement relocation exhibit.

The Executive Director of the Development Authority of Bryan County, Anna Chafin, said she “think[s] the area will take off because of the new interchange. It’s evident with the industrial property, there’s a lot of interest and activity right now. Also, you’re close to the planned amenities and schools that will all be complete in the next couple of years. It’s the whole live, work, and play concept.” Bryan County Commission Chairman, Carter Infinger, praised the new interchange’s accessibility, saying “during hurricane evacuations, this gives another path to get people on the road and out of harm’s way quickly and more efficiently, which we’re grateful for.”

The $19 million project concluded in 2021, with the new interchange officially opening on January 22nd.